How does ISO affect photos in light

Or: What is the noise there?

In analog photography, the ISO figure stands for film speed. The more sensitive the film, the less light is required. As an analog photographer, you have to be clear before starting your project which film and which sensitivity you need, i.e. what kind of light will be available. Changing the film is not so easy with analog photography.

Here comes a great advantage of digital photography: with the digital cameras, the ISO setting can be changed from picture to picture.

In digital cameras, the ISO sensitivity stands for the light sensitivity of the image sensor.

Some recommendations for this can be found in the camera manual. The following information is based on a Canon full frame camera and assumes that no flash is used.

As shown in the example in the chapter Aperture and exposure time with the amount of water, time and container size, the ISO setting corresponds to the container size. 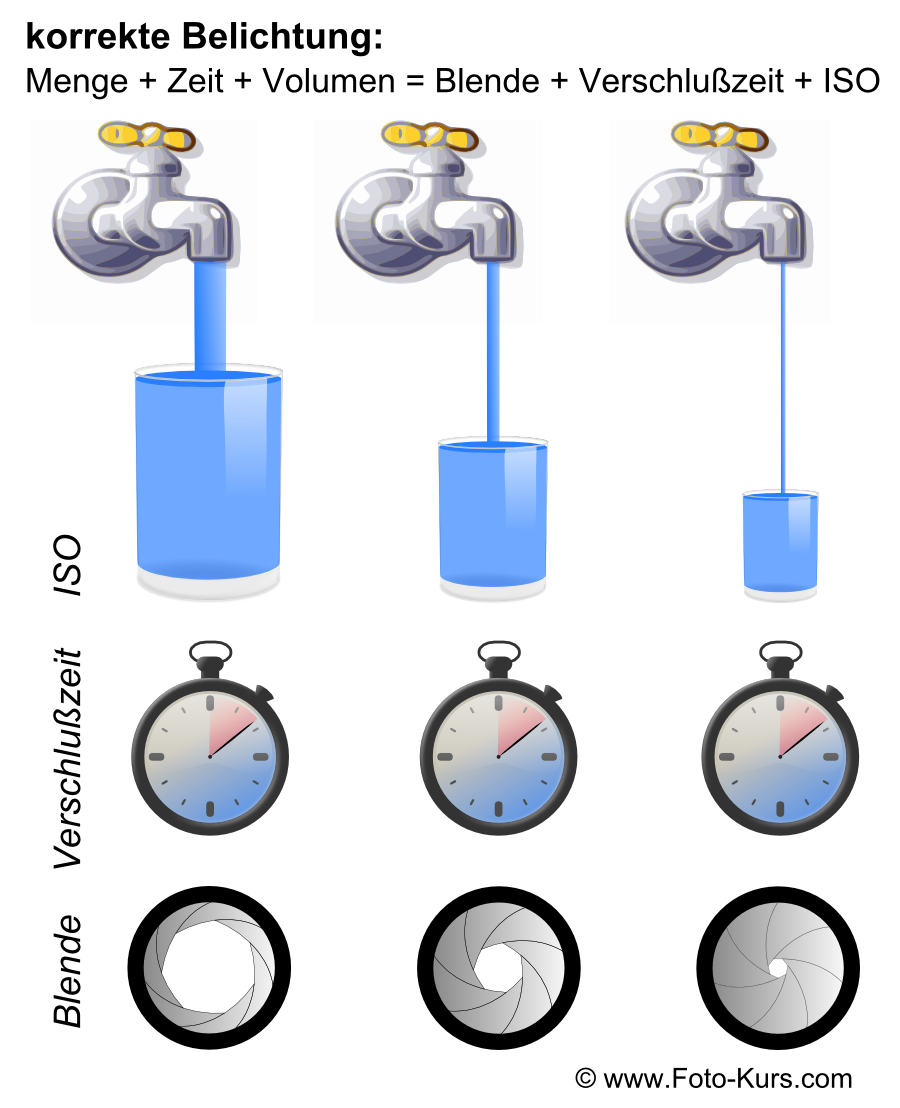 Increasing the sensitivity means that less light is required to properly expose the image. In the graphic we now need a small container to fill it completely.

So we have 3 setting options for a correctly exposed image.

Let us assume that the photo is ideally exposed with the following settings: aperture value f / 2.8, exposure time 1/50 s and ISO 100.

So we have a linear relationship here.

The same works with the aperture:

In photo B we have more light due to the open aperture and therefore need a less “sensitive sensor”.

Now you could actually think that the more sensitive, the better. But these ISO sensitivity also has its drawbacks.

With the sensitivity (i.e. higher ISO values), the noise also increases. This makes the photo less contrast and appears blurred. Let's first take a look at the effects directly on sample photos.

Please note: the noise behavior is also very dependent on the quality of the camera! The size of the image sensor has a big impact here. The following recordings were made with a full-frame sensor. This means that acceptable qualities with higher ISO values ​​are still possible. The same ISO setting on other cameras can result in a completely unusable photo. Small compact cameras sometimes deliver cruel results at ISO 400 that are completely noisy. Therefore test yourself with your own camera!

The following photos were taken by changing the shutter speed and ISO setting. Care was taken to ensure that all photos have the same brightness.

In the first image section, the photo was taken at ISO 25600. Here it is very clearly visible how the noise behavior affects. Darker areas are more affected than light ones.

In the second section of the image, the ISO number has been set to 4000. The noise can be clearly seen in the neck area - almost no noise can be seen on white, but the dark areas become problematic.

In the third section of the image with an ISO value of 250, there is very little noise to be seen (with this full-frame camera).

So our image quality is much better at low ISO values ​​- but we also need more light. In the studio with studio flashes, people like to work with ISO 50 in order to achieve the best possible quality. It always works when you have full control over the light.

Where does the noise come from?

We still know it from old, analog music cassettes - there was always a background noise. If it was quiet during a music recording, a noise could still be heard when listening to it later. This background noise is also present with digital image sensors!

If a recording was recorded too quietly, the volume could be increased afterwards - but this also made the noise louder. And something similar happens when the ISO values ​​are increased. The background noise increases and becomes visible in the form of color noise and brightness noise.

Difference between DIN & ASA and ISO

Before the ISO, the names DIN and ASA were used in photography for film sensitivity.

The difference between the two was the size information and the fact that DIN values ​​were given logarithmically, while the ASA was given linearly.

Today's ISO specification combines both values ​​- on the films the specifications are then ISO 100/21 ° - the second specification is not given for digital cameras, so hardly anyone will speak of ISO 100/21 ° in everyday language, but now of ISO 100. This information can still be found in photo books and sometimes in specialist magazines.

Task on ISO value and noise

Take 3 shots with almost the same exposure (i.e. the finished photo should not be lighter or darker). Vary here from a very small ISO value to a very high ISO value.

Examine the noise in the 100% view on the computer.

Tip: Use a tripod to get exactly the same section three times and photograph an immovable object.

How to take a correctly exposed photo

We usually have a given lighting situation. We want to capture this light. There is too much and too little. If we catch too little light, the camera sensor does not yet react and we get a black area (one speaks of "flooded"). 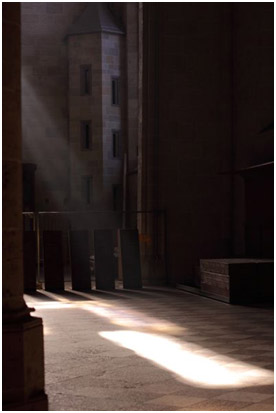 If we capture too much light, pixels of the image sensor “overflow”. In this area we only get a white area without any drawing (one speaks of "burned out"). This does not mean the entire image sensor, but the corresponding pixels or areas on which the light falls. Very nice to see in the example photo of the church interior, where daylight falls on the floor. The tiles disappear completely and there is no longer any recognizable structure of the tiles. It's a pure white spot.

Now, of course, we don't have a single large black area or a single large bright area. Our photo subject has dark and light areas. And both areas should still have a drawing (something should be recognizable). Let's call them extreme areas. If these extreme areas are too far apart (midday sun and an additional house entrance into which photos are to be taken), we have a problem. The contrast range of the subject is too high. The human eye can adapt here. Calculations take place automatically in the brain. The camera can't! Now, as a photographer, we have to pay attention to whether we are in an extreme situation that has a higher contrast range than the digital camera can depict, or whether we have the wrong technical settings.

Book recommendations on the basics of photography