What do the Welsh think about Brexit?

Interview on Brexit: "The free exchange of ideas is now up for debate" 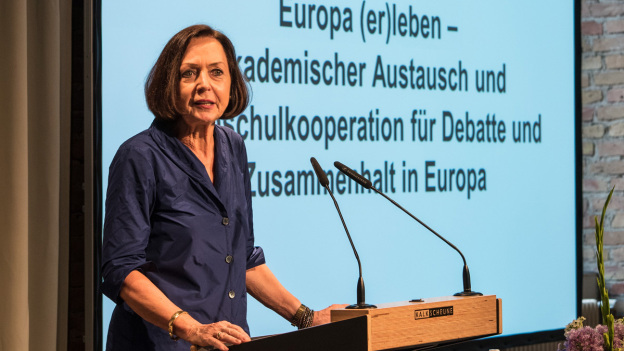 Great Britain has decided to leave the European Union. In an interview, DAAD President Professor Margret Wintermantel speaks about the possible consequences for scientific collaborations, student exchanges and international projects.

Professor Wintermantel, the British decided to leave the European Union in June 2016. How do you rate the situation?

Margret winter coat: I think it's bad. Brexit will make cooperation between British and European universities more difficult. It was not a good decision for the universities, for the scientists and for the students.

Although it is not yet clear how the future of science relations between Great Britain and the EU will be shaped, the universities in Great Britain are already feeling negative consequences. The British daily newspaper The Guardian reported that UK universities and academics had been asked to stop participating in joint projects; international researchers are lured away by other countries.

We regret that Great Britain has actually decided to leave the EU, because we are convinced that Europe needs an intensive scientific exchange and diverse cooperation in order to remain internationally competitive. At the DAAD network conference in Bonn in July, university representatives reported that their partners in the United Kingdom very much regretted Brexit and continued to be very interested in cooperation. We will keep a close dialogue on this with our member universities and British partners. Our branch in London is extremely important to us in this regard.

British universities had advertised staying in the EU, and more than 150 renowned scientists - including the astrophysicist Stephen Hawking - warned of a “brain drain”, meaning that scientists would migrate or not even come to the island. What are the consequences of Brexit for German scientists in Great Britain?

Nothing will change for German and other EU scientists within the first two years after the application to leave (the date of which is still open). However, there is great uncertainty, and some no longer feel welcome. A particularly large number of Germans are employed at British universities. Of almost 32,000 EU nationals who teach and research there, every sixth person has German citizenship, which is the largest group. So far, researchers have benefited from freedom of movement within the EU. You do not need a visa or a residence permit. Great Britain is generally very attractive and the quality of the universities is high, also beyond Oxford, Cambridge and Imperial College. I recently spoke to colleagues in Cambridge about the possible consequences of Brexit. Everyone was concerned: The free exchange of ideas, the fact that universities should cooperate, organize workshops and summer schools together and benefit from EU funding - all of this is now up for debate.

Great Britain is one of the most important destination countries in Europe for German students, researchers and academics. Along with Spain and France, it is one of the most popular countries in the Erasmus + program. 4,400 Germans are currently studying in Great Britain as part of Erasmus + - they do not have to pay any tuition fees. Will Brexit endanger this longstanding cooperation?

It is to be feared that studying will become much more expensive, because tuition fees in Great Britain have increased enormously in recent years. If the British want to keep their openness to students from European countries, this has to be negotiated. So far, EU citizens pay reduced tuition fees in the undergraduate level (Bachelor), the so-called "home fees". England and Wales have a limit of £ 9,000. For non-EU citizens, however, there is no upper limit, the tuition fees are between 15,000 and almost 30,000 euros per year. From the 2017/18 academic year onwards, the so-called home fees will increase. Some universities like Durham, Kent or Royal Holloway have already officially announced this recently, quoting GBP 9,250. I expect more universities to follow the trend.

British students could also find it a disadvantage if fewer international students come to the island.

British students are less likely to study abroad for a variety of reasons. The "internationalization at home", the strong presence of international students at the universities with almost 20 percent, had created a certain balance. It is very possible that the number of students from EU member states, which currently accounts for more than 28 percent of international students, will decrease in Great Britain with rising tuition fees. And this will also change the so-called “classroom balance”, i.e. the intellectual contribution and the impulses of the different groups, at British universities.

Although Switzerland never belonged to the EU, Swiss students and EU citizens in Great Britain have so far only had to pay reduced tuition fees. Do you think such a special regulation is also conceivable for the 27 member states of the EU?

Since the British government has increasingly withdrawn from student funding and research funding in recent years, this is doubtful. British universities rely on fee income. It is difficult to think of a third category - in addition to "home fees" and "non EU international fees", as before, as a further group then perhaps the "former EU member state fees". How did you justify this to other international students after the elimination of the principle of equal treatment within the EU?

You just mentioned research funding. What are the consequences of leaving the EU in this regard?

In addition to Germany, Great Britain has so far received the highest amount of European funding for research and innovation with a share of ten percent. The British government will have to absorb the loss of European funding. The universities in the United Kingdom would also no longer be eligible for the ERC (European Research Council) grants, which at some British universities account for up to 15 percent of the research budget. The top five universities of Cambridge, Oxford, UCL, Imperial College and Edinburgh currently draw around 20 percent of their public funding from EU funds.

Which scenarios are conceivable in this regard?

That depends largely on the UK's future status, which will be negotiated over the next two (or more) years. Will the country remain part of the European Economic Area? Or will it be treated as a normal non-EU country by the EU? That would then presumably also mean that Great Britain would no longer receive any more money from the European Union's framework program for research and innovation, "Horizon 2020". The equivalent of around 930 million euros was lost each year. The London-based technology group Digital Science has published a study according to which it would hit nanotechnology, forestry and evolutionary biology in particular - research areas more than half of which are funded by EU funds. The question is whether science receives the necessary financial support, even if other areas previously funded by the EU, such as agriculture or regional and structural funding, also show a need.

Could Brexit also have an impact on the projects “Higher and Further Education Opportunities and Perspectives for Syrians” (HOPES) and “European Union Support for Higher Education in the ASEAN Region” (SHARE), in which Germany is represented by the DAAD and in Consortium working with Great Britain?

That also depends on the future status of Great Britain in relation to the EU. We are concerned about the tendency to assign Great Britain a junior rather than a senior role in joint projects. We have close ties to the UK. Should the country no longer be fully eligible to apply in our joint consortia in the future, we would have to rethink many of our successful joint projects.