Is the slaughter of cows justified?

How vegetarian is milk?

Milk has a broad reputation for being an animal product that does not require the slaughter of animals to be obtained. Quite the opposite: cows even wanted to be milked because otherwise they would suffer from full udders, is an argument that is often heard. A look behind the scenes of the dairy industry reveals why more and more people are deciding not to consume milk and dairy products.

The statistics say that every Austrian consumes 18.4 kg of beef per year. Milk consumption is 90 kg per capita, plus 18.3 kg of cheese plus 16.2 kg of other dairy products. In order to be able to produce these quantities, 2,000,000 cattle are kept in this country. The 527,000 dairy cows give around 6,000 liters of milk per cow and year. Only 9% of this milk is fed to calves (mostly indirectly via suction buckets). 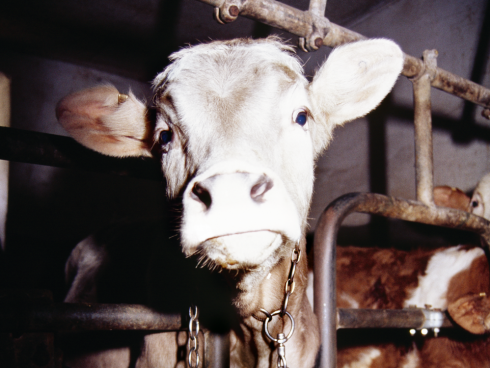 95% of dairy cows from conventional husbandry live in permanent tethering. Although this is actually forbidden according to the Federal Animal Protection Act, there are generous exceptions for legal or technical reasons: The lack of pasture or structural defects are used as an excuse to lock cows in the barn all year round. Most of the animals live in cramped crates, are chained around their necks, are dehorned (the nerve-ridden horns are forcibly burned out and the stumps are desolated), have to live over their own droppings without litter, are forced to stand up with their front legs first without being anatomical, and can neither turning around or going forwards or backwards, develop severe mental disorders such as monotonies and in many cases never see the sun.

From milk veal to veal

Like us humans, cows can only give milk if they have previously given birth to a child. In agricultural practice, the animals are mostly artificially fertilized. Your newborn will be taken away from you on the day of the birth. The mother is then milked several times a day, and the child is raised in the calves. If it is male, it is fattened to a live weight of 160 kg within 3 months. It is then transported to the slaughterhouse and killed. Some males are kept longer and marketed as beef after a dreary bull fattening (80% of which is carried out on fully slatted floors). The female animals are “lucky”, like their mothers repeatedly impregnated, to be separated from their children and after an average of 5 years, when they are completely exhausted, to be slaughtered. In 2008, almost a third of the 2 million cattle, i.e. 610,000 animals, were killed in the slaughterhouses in Austria. An average of 80,000 calves are transported across Europe and slaughtered abroad. Slaughtering cows is particularly problematic. Due to the size and robust anatomy of the animals, stunning with a water bath or electric shock is not possible. With a nail gun, the top of the skull is smashed through a metal bolt to destroy parts of the brain. The aim is to make the living being unable to move so that it can bleed to death. The blood must be pumped out of the body before the heartbeat dies, otherwise the meat might not be able to be sold. This bleeding phase usually lasts 4 minutes - it is not uncommon for animals to wake up from the "stunning" and experience their agony while still fully conscious, as video recordings (see link tip) prove.

Organic as an alternative?

At first glance, the production guidelines of BIO-Austria appear to be very progressive. In fact, group housing is much more widespread in the biological field. The feed of the animals must be GMO-free, litter is standard and tethering is only permitted with the explicit approval of the inspection body - otherwise the animals have to go outside or to run at least twice a week. "Cow trainers" (ie electric shocks) can only be used under certain conditions and calves may not be kept in individual boxes. The sad aftertaste, however, is that dehorning is also taking place in the organic sector and artificial insemination is the norm. The basic problem of the dairy industry remains: the cows are high-performance animals that have been converted into milk machines through decades of breeding. The amount of milk expressed is a multiple of what would be bearable and natural for the ancestors of today's cows. After the artificial insemination, the mother and child are separated as in conventional husbandry. In organic farming, too, milk production is inextricably linked to meat production. No farmer can escape economic constraints and competition. Nobody can afford to risk bankruptcy. The welfare of the animals is also subordinated to profit within the organic guidelines. Anyone who buys milk supports this cycle. Many calf fattening would not be profitable without milk. The run of the organic animals is relatively large, but the suffering and trauma of the divided families and the finality of the slaughter are much greater.

Right of the cow

The question arises as to whether we humans have the right to use animals for our purposes. Increasingly large parts of science are coming to the conclusion that animals should not be treated differently simply because of their species affiliation if they otherwise have similar characteristics. Cows can feel fear, pain and love, maintain social contacts and communicate. Then why shouldn't moral rules also apply when dealing with them?

If cows could choose how we humans should feed themselves, they would prefer a vegan diet. Only a purely plant-based diet guarantees that animals do not have to live a short life full of agony up to premature death and at the same time ensures that no small calf has to die. More and more people are opting for a vegan diet because they no longer want to support the dairy industry and do not feel that the agricultural practice is justified.

Soy products such as soy milk and soy yoghurts (which, unlike cattle feed, do not come from the rainforest or are genetically modified) are available in every supermarket. In addition, a wide range of plant-based alternatives such as milk or drinks based on oats, almonds or hemp are offered. Even vegan cheese is now available in almost every common supermarket.

527,000 dairy cows in Austria (stock 2008)
610,000 cattle slaughtered 2008 (half of which are bulls or calves that cannot give milk)
5 years average lifespan a dairy cow
30 years possible lifespan a dairy cow
3 months lifespan of a calf in veal production
92.3 kg of milk (Consumption of raw and drinking milk in 2008 per person)

You can find out more about alternatives to cow's milk here.

The roar of the cattle